Band on a budget - the recording process part 8

Today, I shall be mostly recording vocals...*


My view for the next few hours is largely going to look like this: 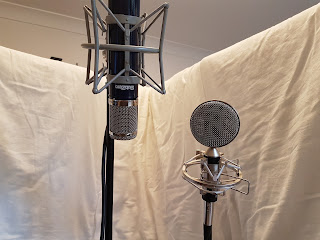 On the left is a subzero tube microphone, it's an AKG clone at a fraction of the price but I've been very happy with it since I bought it, especially on my vocals.
On the right is a classic lollipop ribbon mic made by Stew at Xaudia. I don't normally tend to double mic vocals for my more acoustic/folky stuff but the band tracks are a bit more rocky so I thought I'd experiment with something.
The ribbon mic is going into one of these: 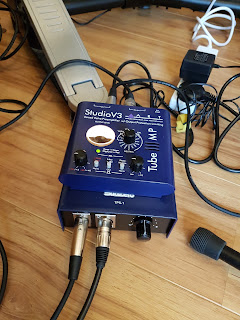 This (the box on the top) is a little tube pre-amp and I've cranked it as high as I can to try and drive the tube a bit. On the louder sections it's just beginning to distort a bit and I'm hoping a bit of judicious mixing with the other mic will give things a bit of edge in places.
Of course I'm keeping any distortion in the analogue part of the chain, overall levels going into Reaper are peaking at around -10dB so there's plenty of headroom.


Both mics are about 12 inches from my mouth and angled down from roughly eye-height. This deals with any proximity effect from the valve mic (I have it set in cardioid as I slightly prefer the sound), stops any plosives bothering the ribbon mic (could get expensive) and also keeps the vocals from sounding to bright and nasal.


So far I've recorded the vocals for Shadowbones and Words and I'm now taking a bit of a break for some lunch.
I do have another recording date this afternoon as well, it's my recorded session for the JBL competition I entered a couple of months ago, so I might not do much more this afternoon so I can keep my voice fairly fresh.


That does mean the room is going to look like this for the next couple of days: 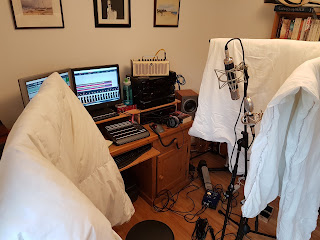 Which isn't hugely convenient, but is necessary.
For those of you who are new to this, you may be asking, as a friend of mine has, "what's with all the duvets?"
The answer is that it's basic, but effective**, acoustic treatment for the room. The duvets act as sound baffles and stop the microphones picking up unwanted reflected sounds. Basically, I just want the sound of the vocals, not the vocals plus the boxy-sounding room. This is a side-effect of putting the microphones a decent distance away from the source but it's worth the trade-off in my opinion.


What has become clear is that I'm going to have to do a lot more manipulation of the tracks on these mixes. With a lot of my stuff to date, the vocal lines haven't been hugely dynamic, and a bit of parallel compression and some automation has been enough to keep things in control.
That's not going to be the case with this set of tracks, I'll be doing a lot more multing and grouping of tracks to get things in shape.


Right, the timer has just pinged for lunch...


* If you're of a certain age and from the UK you will have read that line in a very specific accent.
** Sound On Sound magazine did a test a while back looking at different commercial absorbers and their benchmark as a duvet: http://www.soundonsound.com/reviews/choosing-using-porous-absorbers
Posted by blinddrew at 04:31