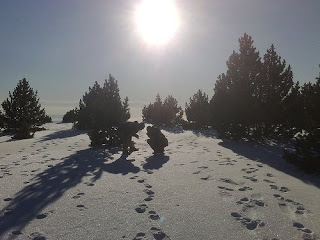 A funny thing happened in York yesterday, they got the gritter out to the footpath by the side of the river. This is probably the most heavily used footpath in the city but for the last fortnight has remained resolutely ungritted. I can only assume the conversation in the council offices went something like this:
"hey Ted! I've had a thought."
"What's that then?"
"Do you suppose that there might be some kind of correlation between the fact that every night for the last two weeks the temperature has been below freezing, and the fact that the ice isn't going away?"
"Bejesus Ted you might be right! To the Gritters!"
Seriously though, i can just about buy the fact that the first really cold night may have taken them by surprise (if they'd been cut off from any form of media for a week!) but really, putting the grit down after two-weeks of sub-zero temperatures?
Maybe the conversation went more like this:
"Hey Ted! I've had a thought."
"What's that then?"
"You know how we've been saying that you can never believe what the weathermen say?"
"Yes Ted, that's true, can't believe a word of it."
"Well, you know how they've been saying that it'll be below freezing every night for the last two weeks?"
"that's true Ted, haven't shut up about it mow have they?"
"Well, you know, it has actually been below freezing every night for the last two weeks."
"Bejesus Ted you're right! To the Gritters!"
I don't know why everyone who works for the council is called Ted or why half of them are irish but i'm willing to wager that that's exactly how the conversation went.
Well, one of those options is. probably.
Have a nice winter picture to go with it so you feel nice and christmassy...
Posted by blinddrew at 05:30 1 comment: