Credit where it's due

A few posts ago i urged you to write to your MP to persuade them to sign an early day motion opposing potential moves towards a two-speed internet. Obviously I wrote to mine a well and, whilst we may hold very different political leanings, there's a reason he has been re-elected; he communicates with his constituents.
It turns out, this time, that our interests are aligned and i was pleased to receive the below letter from him confirming that he'd signed the motion.
Good stuff Hugh Bailey, thank you. 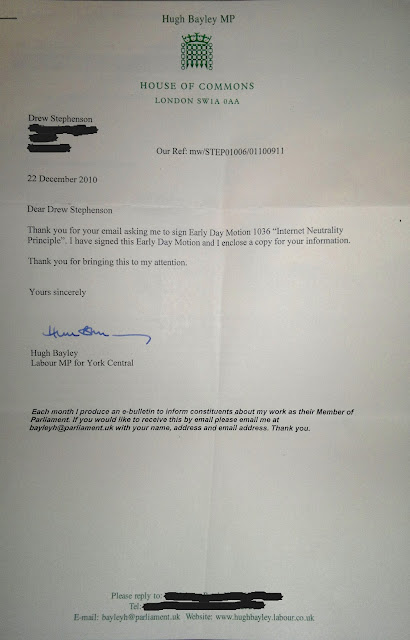 Posted by blinddrew at 14:18 No comments:

Equations for the future

So the internet has been around a while now, the major labels are still suing their customers as their first response to free advertising (i call it sharing, the more dramatic amongst the industry call it piracy. Really? Piracy? Read some news articles on Somalian waters or the East China Sea to find out what modern piracy really is) but somehow they're still there and, more depressingly, we're still here.
But these things take time, a lot of time when your opponents (and perversely this includes people like the BPI who are supposed to represent me) have the ears of the government.
But to recap...

I think what we're seeing the beginning of is a mass levelling of the playing field.
Basically we will end up with fewer superstars but more people making a much more modest living from their music.
There are a multitude of alternative business models out there, they're all evolving, the trick is finding one that works for you.
Most of them are based around the following (which you'll see in a number of places on the web but i think it originated at Techdirt):
Connect with Fans (CwF) + Reason to Buy (RtB) = $
This is much the same as the 1000 True Fans theory but expressed differently.

Effectively it comes down to your ability to engage with your fans and persuade them to support you (CwF) and your producing a product that's sufficiently high quality to make it worth buying instead of downloading (RtB).

Personally i think there's a factor missing here, which, for lack of a better term, i shall call Elevation. And this what the current major labels do.
With the rise of free distribution mechanisms and cheaper technology there is more and more really good music being made. The challenge now for any artist is to stand out from the crowd, to raise yourself or your band above the level of everyone else and get noticed.
Sadly it's not enough just to be really talented, you still need some mechanism to elevate yourself above the noise level.
The major labels have massive publicity and marketing budgets, that's how they do it but it doesn't work for an independent act.
Unless you're an independent act with a corporation-sized bank account. No? Let's move on then...
As always though, there are a number of alternative ways to do this. One way is via working out what your niche is and targetting that, there's a lady who writes songs about sailing (whose name i forget, irritatingly) who sells very well to, funnily enough, the yachting and sailing crowd. That's her thing and it's effective for her.
Another option is to consider your location and work out if you're in the best place for your music, different areas have different scenes, sometimes it helps to be part of that scene, sometimes it's best to be unique in your region. What you don't want to be is stuck in the middle.
Another option is to partner with a publicist / advertiser, there are people trying to make careers there as well and some mutual backscratching might be possible.

One approach that appears to be coming through is to target a really, really small niche, with a very high-end product (hat tip to Confused of Calcutta). The mass market is always going to be the territory of the major labels - don't try and compete, figure out what your Unique Selling Point is and work out how to make the most of it.

So i think the equation should actually be:
e(CwF + RtB) = $
But at the end of 2010 i find myself no nearer establishing what my business model is. So i suspect 2011 will be no more successful for me than this year was. Hopefully others will get further along that particular line.
Posted by blinddrew at 07:31 2 comments: