Who's web is it anyway?

I reckon it's ours. Yours, mine, everyone else's. All equal in the ether.
Hence i've joined the petition to try and ensure the UK keeps it's net-neutrality.

Rich Huxley's site gives you a bit more detail, but basically, click this net neutrality letter link, fill in your details and it will create an e-mail and send it to your MP.

I want the web to there for all of us, not who Sky or BT or Virgin decide they want it to be open to.
Posted by blinddrew at 14:09 No comments:

Just a quick note to say a massive thank you to everyone who helped out and came down to the album launch. Top night all-round, hope everyone's enjoying the CDs.
Mail orders will be getting sorted this week, as will download options via Bandcamp. We'll probably sort something out on itunes in time but they're more expensive for you, less return for us and lower quality. So i really do recommend the bandcamp alternative.
Anyway, enough sales for this week, i'm knackered.
Thanks again
Drew and Hils
Posted by blinddrew at 10:51 2 comments: 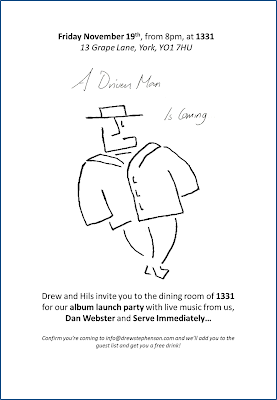 Now then, two-and-a-bit years' work and now we're down to just one week to go. I will confess to being more than a bit excited...

We've got the support acts lined up: Serve Immediately... and Dan Webster,
We've got the venue sorted out, 1331 on Grape Lane in York,
We've got our set-list chosen (it's a secret)
And we've got a fair number of you coming down to make it all happen.

To say thank you for all the support we've had, we'd like to buy you a drink, so if you're going to come down, drop me a line, we'll add you to the guest list, and your first drink is on us!

And for anybody who's not yet had chance to hear us play, you can listen to some tracks from the album on myspace now (full length tracks as well, none of that 30-second-sample rubbish)

Hope to see loads of you there
stay well
Posted by blinddrew at 13:21 1 comment:

Just to confirm, the launch gig is the 19th of November not December as i had erroneously written in the last post. Thanks for spotting that Daniel!
I blame a knock on the head...
Posted by blinddrew at 10:30 No comments:

CDs and listening and stuff

Right, well amongst other things, last night i picked up the CDs.
That's about where the good news stops.
The bad news involves having a disagreement with my car about where we were going and coming to a decision that upside down in the ditch was the answer.
That and finding out there's a problem with the CDs.
It's fair to say that i've had better days*.

But, i'll be sorting out the cds in time for the launch. So, date for your diary.
Friday 19th November.
Upstairs in 1331 (Grape Lane in York)
Free entry
We'll be playing, Dr Jones' other band will be playing and we'll be joined by the excellent Dan Webster as well.
CDs (in all their corrected glory) will be available for ten of your english pounds.

For those of you who've pre-ordered and aren't based in York, i'll be getting yours in the post to you once they're sorted and i'll sent you bank details.

In between now and then i will be putting the various tracks up in various places (myspace and bandcamp) so that you can have a listen prior to parting with your hard earned.

Watch out for a flyer nearer the time (i.e. when i've had time to do it**) that will help persuade you that this really is the best thing to do on friday night.
Stay well
Drew

*As, to be fair, has the car.And, unlike the car, i don't have a scratch on me.
** Today i have mostly been speaking to insurance companies and their associates.
Posted by blinddrew at 15:24 3 comments: