Band on a budget - the recording process part 7

It's been a while since the last post as real life has got back in the way, as it usually does, but I now have a bit of time off so I'm hoping to make some progress over the next couple of weeks.


First off is listening back through what we've got, confirming the best takes and applying any fixes where we've got issues on the recording.
We've got a few pops and crackles in places that will take a bit of surgical correction but most of it doesn't look too bad (I think there's a function to do multiple simultaneous edits in Reaper - need to check how that works precisely) but there's one chunk that is concerning me a bit more. The best pass of Denmark Street has an extensive chunk of crackling on the bass line and I'm not sure we're going to be able to rescue it. I'll have a quick look at the other takes but I think the best solution is to re-record it. Fortunately we just DI'd the bass so this should be pretty straightforward.


Further lessons for next time: I mentioned previously that my note-taking hadn't been as comprehensive as I would have liked. Thing to do next time is just leave the mics open after a take and get everyone's opinion straightaway. That way, at the end of each take, I'd have comments like, "that was the best one" or "nope, I screwed that up in the middle" etc. 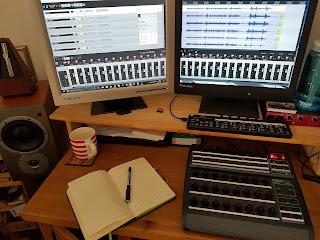 Like everything else in this little escapade my mixing set-up is also at the budget end of things, however I've been able to make a few tweaks along the way to speed up the process. From input to output the set-up is roughly like this:


Input
Focusrite 8i6 interface - as well as the Tascam that we used for recording I have this focusrite permanently connected at home. It's a good little unit that allows me to put in overdubs and run separate outputs for headphones, my Yamaha THX10 (that I use for small-speaker-monitoring) and my main monitors.


DAW and template
Having recorded in Reaper it would be crazy to mix in anything else (not that I have anything else other than a really old CubaseSX) but here's where we get into the templates that I mentioned in an earlier post. My standard project template has 40 tracks set-up, 32 of these are set up as standard audio tracks and have ReaEQ and a focusrite compressor in the first two slots of the inserts. The other 8 are labelled as bus tracks for Vox, drums, bass, two guitars, candy, blank and the dummy master.
The candy one is for any little extra bits of ear-candy in a track, the blank one gets used either for extra instruments in band work or parallel compression if I'm doing more acoustic stuff.
I have the template set up like this so that I can use the couple of bits of hardware that you can see on the desk.
I also have the Sonarworks reference 3 plugin on the master channel - this little bit of code is designed to take the measured frequency response of your headphones and then apply an EQ correction to make them as flat as possible.


Hardware
The Behringer BCR2000 (bottom right with all the knobs) has been configured to work as a basic transport control and channel strip. By linking it to the ReaEQ and the compressor using midi commands I'm able to have hands on control of a 6-band EQ (frequency, gain and Q-factor for each band) and the compressor controls (threshold, ratio, attack, release, input and output gain). It also has a few other things set up: track mute and solo, track FX bypass, record prime, EQ bypass, compressor bypass, track volume and pan, master volume and pan, master FX bypass (for use when switching between headphones and speakers), master mono and the basic transport controls. For complex reasons this only works on the first 32 channels - hence the template.
The Korg nanocontrol (with the sliders, mid-right) then controls my 8 bus tracks. It's set up with volume, pan, mute, solo and track select for each bus track, plus a few more useful transport controls (the cycle button and marker set and steps being the most useful).
This took ages to set up but between them it gives me a much more tactile control and has speeded up my workflow considerably.


Monitoring
The output from the focusrite goes in three directions:
Headphones - I generally use a set of Beyerdynamic DT990 pros (the 250 ohm versions) which are driven just fine from the focusrite headphone socket.
Grot-box monitoring - I have my Yamaha THX10 guitar amp set up as a small-speaker monitor for checking how things will translate to things like portable speakers or radios.
Main monitoring - the main output goes to a Musical Fidelity E100 amplifier and from there to a set of Dynaudio Audience 50 speakers. This is Hi-Fi gear rather than studio gear so it can be a bit more flattering and bit less revealing that I'd like, but it is good kit and it's not the weakest link in the chain.


The room
Which brings my nicely to the room I mix in. It's a nice shape and size (13'x10'x8') but it has no acoustic treatment at all. I've never tried to measure it but I doubt it has particularly good properties in any aspect. Hence I do most of my mixing on headphones.


So there you go, that's what my world is going to look like for the next few days!
Posted by blinddrew at 05:02