Yep, just when i was despairing of being able to a gig that didn't involve doing my cover of Pokerface those good people at CRS have got me a little stormer. Sunday the 7th Dr Jones and I will be supporting LAU. 2 time Radio 2 Folk Awards winners, 3 dazzling musicians and all round good blokes to boot. If you've not heard them, get them listened to here. But that doesn't do them justice so print off a copy of the flyer (cheap entry!) and get yourselves down to fibbers to hear them in the flesh. Oh yes, and make sure you're there for 8 so you can hear us too! 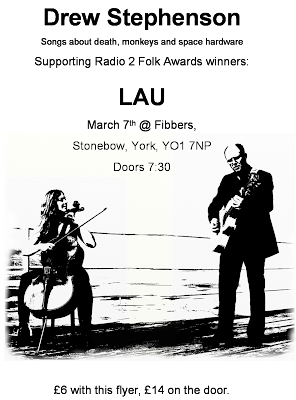 Stay well
Posted by blinddrew at 13:22 No comments: 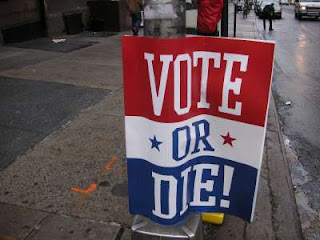 In the spirit of democracy, and because i found a new widget on the site, i've added a little poll on the right hand side of the page. Following on from the earlier posts about what to do with the album when it's done, i thought i'd throw open the floor (as it were, not literally though, that would be awkward, and probably inconvenient).
So make your mark and have your say, you're empowered!*
Quick reminder that we're playing the Fox and Hounds in Newmillerdam in Wakefield on Saturday with our label-mates TWO, should be good.
Stay well
* you may be empowered but i still reserve the right to ignore the lot of you!
Posted by blinddrew at 13:48 No comments:

Cracking gig in Melton's Too last night. Thanks to everyone who made it down, and thanks to all the guest musicians. Top night all round.
Despite the curse of two-wheelers and Meltons coming round again. The first time we played there i got knocked off my motorbike the day before and had a nice concussion, this time i fell off my mountain bike and dislocated a finger (fortunately it was on my right hand and i was able to pop it straight back in).
Haven't made any progress on the album yet i'm afraid. Still working on it and still thinking about how we release it, but, in one form or another, release it we will.
I'm also trying to figure out how i can get MP3s up here on the site so i can share some new stuff with you as and when i come up with it. Any techs out there got any ideas?
Just a quick update this time, partly because it still hurts to type, but mostly because i've been too lazy/busy to do anything. Anyway, for those in the north we have a gig with TWO in Wakefield on the 20th but that's all that's on the radar at the moment.
Stay well.
Posted by blinddrew at 13:16 No comments: