Band on a budget - the recording process part 2


The Instruments
As mentioned previously, we're a four piece with a fairly conventional line up.
Drums: vintage Carlton kit (60s I think) and a mix of more modern cymbals. Plus there will be various other bits of percussion to be overdubbed in places (shakers, tambourines etc)
Bass: Yamaha RBX 300 bass running through a Trace Elliott AH350SMX head. We're hoping to DI the bass but we have a TE 2x10 cab that we'll mic up if we need to.
Lead guitars: A fender strat, a fret king tele, an epiphone of some kind and it wouldn't surprise me if a couple more come out of the closet for this. Run through a Fender bassman amp and a selection of pedals (see the photo below).
Rhythm guitars: A line 6 acoustic 700 that will mainly be used for DI'ing the guide tracks, a PRS SE semi hollow and a '57 Hofner Club 50 running through a Peavey Valveking 112, and a Cole Clark Fat Lady acoustic. I have a fairly basic pedal board but the key other sound generated from it is the output of the Electroharmonix B-9 organ pedal.
Vocals: I sing lead vocals on all the tracks and a couple of them have one or two sets of backing vox. 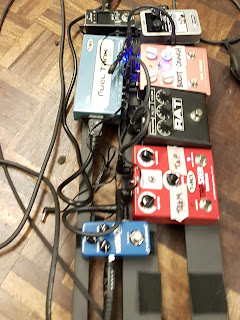 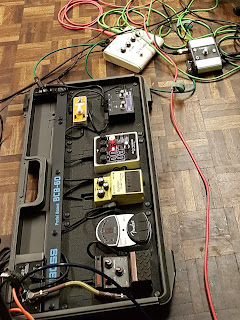 Microphones and pre-amps
This is where things really start to get budget...
For the drums we have a set of gear4music own brand mics, designed for live sound they're what we've got so they'll have to do.
I'll be supplementing those with a couple of Studio Spares s1200s on the snare and as a bit of glue/kick attack.
Other mics that will be pressed into use as required are a Subzero tube mic, an sE2200, an sE3300, an Shure SM58, a Shure Beta 87, a couple of other dynamics and an Xaudia ribbon mic.
The main interface will be a Tascam US16x08, this gives me 8 mic pre-amp channels, two instrument channels and 6 line inputs. To make use of those line inputs I'll also be using our mixing desk, a behringer Xenyx x2222usb as a set of pre-amps. I've made up some sniffer cables to go from the insert points on the mixer to the Tascam.
I have an ART valve pre-amp and another small Behringer mixer on hand as well if we need any other pre-amps or phantom power.


Software
The Tascam comes with its own software for controlling input levels and routing. It also has EQ and compression in the software but I'm not intending to do any manipulation on the way in.
I'll be using Reaper as my DAW, I've got it installed as a portable installation on a USB stick with a set of templates made up, so once we've done the recordings I'll be able to import it onto my main machine with no hiccups. Again, I won't be doing any processing on the way in, it's just a glorified tape-recorder.


Other bits and bobs
Headphones galore,
a little HA400 headphone amp,
spare strings,
spare cables,
re-useable cable ties,
all the usual stuff for our live rig,
a Yamaha THX10 in case of, well, something,
extension leads and adaptors,
cable/socket adaptors
a snake,
headphone extension cables,
lots of mic stands
ankle weights (to stabilise mic stands)
and, of course, duvets. You can never have too many duvets.


Right, that'll do for now, I'm off to stick all my cables through the cable tester...
Posted by blinddrew at 06:01