Band on a budget - the recording process part 1

Tomorrow is Wednesday. On Thursday and Friday I will be attempting to record a few tracks with my band. This is the first time I've tried to record a full band and our first time recording as a four-piece. I'm going to blog about it in the hope that a) it might be interesting reading for anyone else trying to record on a budget, and b) some other people can avoid the mistakes that we will inevitably make.

So here's the low down on what's going on:

The songs and the band
We've chosen to try and record 4 songs over the two days. As we've not recorded together before, don't have a dedicated engineer (that'd be me), and I've not recorded a full band before, this seems like a reasonable number to attempt. We have recorded some acoustic stuff as a three piece before but this is a step up for me.
The band is The Southern Wild and the songs are all original numbers. We are all fairly comfortable with our parts and play them live fairly regularly. We've spent the last few rehearsal sessions focusing on these songs but we have had some unavoidable hitches with illness that means we're probably not quite as confident as we'd hoped.
The line up of the band is Drums, Bass, 2 guitars (mix of acoustic and electric), main vocals and 2 backing vocals.

The recording venue
The disadvantage is that we're not recording in a proper studio (see the budget comment above). The advantage is that we're recording in the hall we regularly rehearse in so we've been able to do some pre-work about position of the drums to start us off.
The hall is large, it has a rectangular floor plan about 15m x10m. The ceiling is at two heights, a nice high (4m) section for 2/3rds of the room dropping to 2.5m for the remaining third. This remaining third can be fully or partially walled off by a moveable wooden wall should we need to isolate a bit of spill.
The hall is hard floored and has very little in the way of soft-furnishing to absorb reflected sounds. We're bringing a load of duvets to control things as much as we can but I suspect we'll need to make a bit of a feature of the room's sound rather than try and fight it.
I've attached a couple of photos that show a bit of the room so you can see roughly what we're dealing with: 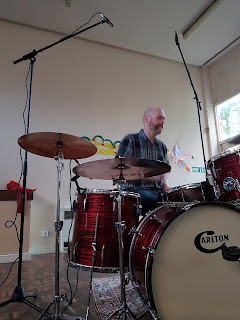 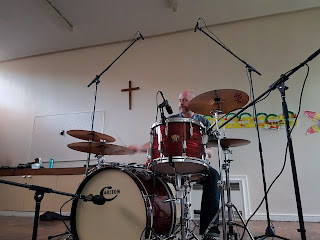 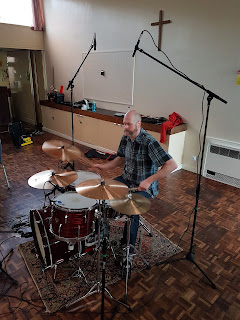 The approach
The original plan was to try and record the drums, bass (DI'd) and lead guitar together. The plan was that I would play the rhythm guitar part at the same time but as I'm doing lead vocals as well (and trying to keep an eye on the session) I want to overdub my guitar and vocal parts so that I can concentrate on them properly. Backing vocals and additional rhythm and guitar parts would also be over-dubbed.
Unfortunately real life has got in the way again and our guitarist has to be elsewhere for about half of the session, so we're probably going to be over-dubbing those guitar parts as well.
So the new plan is to spend Thursday morning getting set up, focusing on the drum and bass sounds. Thursday afternoon and Friday morning will be recording the core of the songs, main and backing vocal over dubs and my guitar parts. Friday afternoon will be lead guitar parts.
The other positive thing about the venue is that if we need to go back and do some extra stuff we can get back in there easily.

The hardware and software
Ok, this is already quite a long entry so we'll pause it there and come back tomorrow for details about the kit.