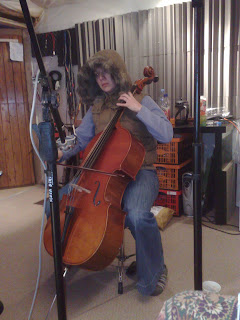 ok, sorry about the delay from the last blog. The day job has been silly and things have had to take a bit of a back seat. But not all of it, no sir!
So tomorrow Dr Jones and I go into the Studio (here's a picture of her in the studio doing the pre-production session last month - i think she thought it was cold. I think i might be in trouble for this photo...) and then, once we've come out of the studio (otherwise it would be ridiculous) we're playing at the Junction in York.
It's friday the 21st so no work the day after for most of us (get them beers in!) and we'll be supporting local singer/songwriter Thom Piddock and also the eclectic and very interesting Katie and the Questions - they raise, stangely enough, more questions than answers...
But it's getting late and tomorrow i have to be up bright and early to go to the studio (WOOHOO! as homer simpson would no-doubt say). Well, not that bright and not that early, but the principle still holds dammit!
So if i don't see you before then, hopefully see you on the 21st.
stay well
Drew
Posted by blinddrew at 14:21