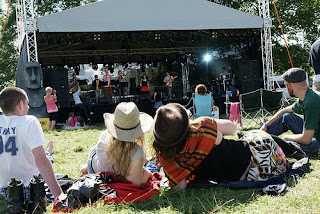 So, we had a cracking little gig in Scarborough last week courtesy of the Coastival. They'll be doing a outdoor festival thing in the summer again this year, find out more here.
And speaking of festivals, Dr Jones has industriously got us a spot at this year's Limetree Festival over near Ripon on the 24th, 25th & 26th July.
Apparently it's a festival "how they used to be", so up to our knees in mud, surrounded by hippies and with no working toilets. Actually that's probably not the marketing image they intended so how about i describe it as a non-commercialised, hype-free Folk and Roots festival with some top bands from the North East. And working plumbing. And probably loads of Hippies and vast amounts of weed, but you know, clouds and silver linings and all that.
It should look something like the picture (otherwise you can sue me for false advertising).
So february has been its usual evil self but March promises to be better, no gigs planned, going to take a bit of time to go back into the studio and do the next chunk on the album, get work under control and then start setting up some more gigs from April onwards.
Stay well
Drew
Posted by blinddrew at 11:25