Band on a budget - the recording process part 10

Today was every bit as frustrating as I expected it to be.

It actually started out quite well, I fished the Tascam interface out of the garage along with some more mic stands and cables and set up a rig to try some alternative guitar mic positions.
This was messy... 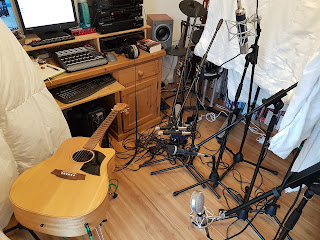 but if it got me a decent guitar sound then I'd consider it worthwhile.

After further experimentation I ended up with a set up like this: 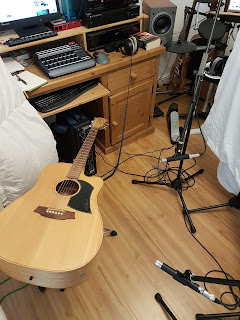 Two small diaphragm capacitor mics, one pointed around the 12th fret (but low down and pointing slightly up and in) and one pointing at the bottom half of the body behind the bridge (this one about horizontal).
Nothing really surprising there but I have made a couple of tweaks from previous occasions trying this, firstly I've brought the mics in a bit from 12" to about 8", and secondly I've used Omni capsules. This has given me the extra presence of close miking but using the omnis means that they're still capturing a broad swathe of the guitar sound.
Plus a DI from the pick up just in case.
Having tried it with strumming, picking, slappy type stuff and a bit of blues, this will now be my starting set-up for this guitar in this room in future.

And that's where the positive part of the day stopped.

Most of the rest of the afternoon was spent trying to nail the part for Northshoremen. This is quite a tricky part for me and, unlike vocals or some lead parts, it needs to flow all the way through the track. I tried recording the whole thing in one pass but after 7 or 8 tries decided a new strategy was required. So I worked through each section of the song in turn (overlapping the previous sections) until I had a reasonable take of the whole thing.
I have, however, ended up with 29 bloody takes! I'm going to need a spreadsheet to work out the best bits for sticking together.
Bloody horrible and sorting it out will be no more fun.

I rounded off the day trying to rerecord the acoustic parts for Building for the Flood - having listened to the existing parts again I decided I wasn't happy with them.
This went slightly better but as these two songs share very similar chords my fingertips were mush from the first half of the afternoon and I was struggling to fret things properly later on.
I think I have some workable takes though.

Tonight I'm going to head to the pub-quiz and then tomorrow I'll try and tackle Words - this promises to be just as much fun as Northshoremen...
Arsebiscuits.
I should really just write some songs I can actually play...
Posted by blinddrew at 09:28