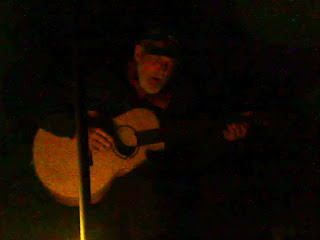 New news! Not that old re-cycled type...
Some of you have been asking when we're playing next in York, well, the answer is "next week".
Yes, fresh from the school of Giving People Plenty of Notice, Dr Jones and I will be playing at the City Screen Basement on Thursday 15th next week. We're playing alongside Heath Lanzillotti and Codeine Vacation, about whom i know nothing. But it's a fiver to get in and that's not bad for 3 acts i reckon. Music starts at 8:00.
Hot on the heels of this we have a gig in Ripon on the Sunday (18th) for those of a (slightly) more northerly bent. It's in a wine bar in the centre of town (I assume it used to be a bank?) - more details under the gigs section.
After that we're going to take a bit of a pause. We're back in the studio doing another chunk on the album shortly and it's going to be a whole load of stuff we don't usually play live; as a result i'm going to need a shed load of practice so we're taking a bit of time away from the stage.
Bear with us, we'll be back soon with a few new songs to tempt your appetite.
stay well
Drew
Posted by blinddrew at 12:36